I haven't ate chicken feet for almost 10 years now. It used to be one of grandma's favorite food and she makes a really good chicken feet dish. However, the preparation work for this dish can sometimes be painful, literally. To make this dish, the chicken feet are cleaned, pat dried, fried in hot oil and then soak in cold water. Chicken feet have a tendency to splatter when fried so I'd suggest frying them in a covered pot. Some Chinese believes that eating chicken feet enhances their joint due to the food's gelatinous properties. Some, like my grandma, just likes how it taste. This used to be a pretty common dish served during Chinese holidays but I have a suspicion that it's probably losing its appeal among the younger generations. I can already hear a few "EWWWWWWW"s behind me as I update this blog.

Chicken feet can be easily purchased in Asian grocery stores. Don't forget to cut the nails off the feet if they haven't done so. Biting on chicken nail is not cute or tasty ;) To those that doesn't know what "bruised ginger" means in culinary lingo, it's when you use the flat side of the knife to press down on the ginger so you "bruise" it but doesn't break it apart. When using dried shiitake mushroom, reserve the liquid you soak them in. This impart tremendous amount of flavor when used in the dish. Using rock sugar makes the chicken feet and shiitake mushroom more tender, at least that's what grandma told me. This dish can be served with white rice or eaten with wonton noodle (a common dish in Malaysia). 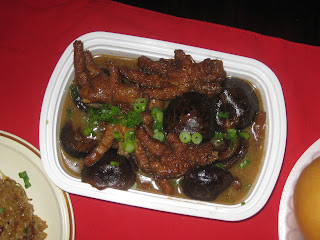 In memory of grandma, I made this dish yesterday. Here is grandma's braised chicken feet with mushroom or "Dong gu gai geok" in Cantonese.

We'll start with the chicken feet prep work. Chop off the nails on the feet if they haven't done so. Just cut past the nail so you don't throw away half of the feet. Clean thoroughly and pat dry with paper towels. It is important to make the chicken feet really dry before you fry them to minimize splattering. On medium flame, heat oil in a pot with a see through lid (so you know when the feet are turning brown). Add chicken feet in small batches into the oil. Cover immediately. Fry for about 5 minutes or you see that the feet are turning brown and stopped splattering. 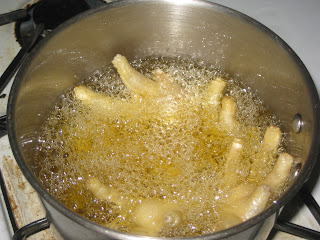 Turn off the fire and wait for another minute before opening the lid. Do not open the lid in between or you'll have some nasty oil splatters on your hands. Remove the chicken feet from the oil and soak in a bowl of cold water for about an hour. 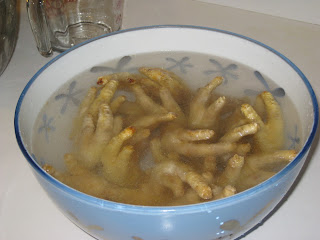 Drain the chicken feet and set them aside. 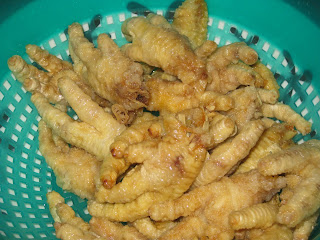 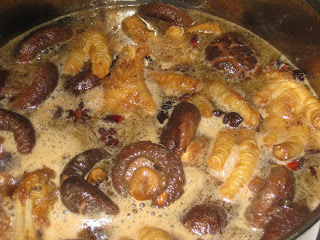 When it comes to a rolling boil, turn the heat to low. Cover and let it simmer. Stir occasionally. If it gets too dry, add more water. Braise for an hour. Top with scallions and/or cilantro.

Posted by Anonymous at 8:40 AM

Thanks, Raymond. Your grandma's recipe is simply delicious!

You're welcome. Hope you enjoyed it!

I have tried your recipe and it came out superb!! All my guests said it was good. Thanks for sharing and hope u can keep posting more wonderful recipes...

Thank you. Hope you enjoyed the dish. My grandma would be proud of me, haha.

Hi Raymond, thanks for sharing this recipe. I have been wondering for so long how this dish is made.. you have just the answer and in time too for me to try this weekend when I am expecting guests and chicken rice is on the menu...I will definitely try this.. thank you!!..:-)

I hope the dish was successful.

Many thanks for the Recipe, Raymond... Made them today and what was delicious!!! easily can have 3 bowls of plain boiled rice with that :)

Hi. Can I know which brand of soya u use? Thks.

I don't have a preferred brand but for this, I used Kikkoman soy sauce.

Can i use a slow cooker to cook the chicken feet?

I'm sure you can Alex, but I have never done it before. I assume it would make the chicken feet more tender.

I am going to cook this this evening. Wish me luck. Thanks.

Good luck. You can do it!

I just cooked this. Super yummy! Thanks Ray! Are you able to share your grandma's wanton mee recipe?

I would love to try, looks good. thank you for sharing us. God bless

Hey Raymond, thanks for the recipe, I didn't know you have to deep fry the feet first! Am gonna do this tomorrow for a CNY dinner. Glad I found your blog.

Hi Raymond.
Thanks for sharing your grandma's recipe. Can I skip the frying and braised the chicken feet as it is?

Thank you in advance for your reply!

How many portion can we get from this recipe? Thanks :)

Hello 👋 how many portion can we get from this recipe? Thanks 😃

Thanks for the recipe. I have problem getting it in very crumble skin ....i didn't do deep fried, is it the problem?

Hi Raymond. This was the 1st time I attempted this dish. It turned out really well. Your recipe is one for keeps. Thanks!

Hi Sean. Yes, you have deep fry the chicken feet.

Thanks for the recipe. Making it now for dinner. Yikes! The oil really pandai splatter everywhere

Hi Mr Raymond
Have been coming back to your recipe for more than 5 years every time Chinese New Year comes around. Thanks so much.

Much blessings for your family ya!

Thank you Passing Thoughts. Hope you enjoyed the recipe for many many more years to come!

Small Kucing --- Yes, have to be careful with the splattering oil. That's why it's important to close with a lid. This blog is dedicated to my loving grandma, Mary Choy Ying Ng.
Thank you for everything.